Developer rounds off an action-packed year

December 19, 2018: National Regional Property Group is celebrating the end of one of its most action-packed years to date. In the year that saw two royal weddings, the football world cup and countless Brexit debates, the Hampshire developer has had its own fair share of excitement.

Regeneration through Build to Rent

Perhaps the biggest milestone of the year for National Regional Property Group was its completion of Southampton’s first ever Build to Rent development, Bow Square.

The £60m project has breathed new life into a previously run-down part of Southampton City Centre. What was once a dilapidated set of fruit and vegetable warehouses now stands proud as a modern apartment community offering 279 apartments. The project was fully handed over to the owner PATRIZIA and its operating partner Atlas Residential.

Commenting at the time, the Leader of Southampton City Council, Councillor Christopher Hammond said: “With the high quality accommodation on offer and the communal facilities such as the gym, a shared garden area and the building of a strong community within the apartment building, it’s obvious why there’s been such a high level of interest in Bow Square.

“Bow Square not only offers fantastic accommodation but is also a lifestyle choice, and we’re delighted to welcome the new residents to Southampton. The provision of high quality rented apartments, which are owned by one company, also provides a sense of security for occupiers. The vibrant city centre location also ensures all additional amenities are on their doorsteps.”

Continuing with the Build to Rent theme, 2018 saw National Regional Property Group start work on another major project in Southampton. The c.£27m scheme, at East Street, will form another vital piece in the puzzle of the area’s regeneration, providing another Build to Rent scheme offering 132 contemporary one and two bedroom apartments. The development will also provide 462 sqm of commercial space and a provision of 49 car parking spaces for residents. Construction of the East Street project is well underway with completion due in 2020. Once complete, the project will be handed over to Grainger plc, one of the UK’s biggest professional landlords.

Mike Harris, Director of Growth at Southampton City Council said: “The development at East Street reinforces the importance of Southampton having a City Centre Master Plan. It gives developers the confidence to be part of the transformation of this part of the city centre, which is currently undergoing significant redevelopment. The provision of high quality apartments in the build to rent sector contributes to attracting and retaining talent in the city, which continues to drive the economic growth of Southampton. This £27m mixed-use regeneration project is a predominantly residential led scheme, adding to the city’s emerging private rental sector offering.”

Plans for National Regional Property Group’s regeneration of Fraser Range were revealed at a public consultation held in February. The development proposed is for 130 much-needed homes, as well as vital sea defences, significant landscaped areas across the site, and a footpath which will go along the front of the development, allowing the public access around to the east of Portsea Island and north to Langstone Harbour. Nearly 200 people attended the consultation with overwhelming positive support for the scheme.

A consultation was held in July to present the proposals for the redevelopment of the former Royal Mail Sorting Office on Slindon Street. Early plans for the scheme were shared at a public exhibition and received positive feedback from residents and other local stakeholders. The intention is to add within the existing cluster of tall buildings a new and exciting tower which will add further interest to Portsmouth’s expanding skyline.

This is a complex site, with significant areas of the existing building currently not being used. It is proposed the site will include residential entrances, communal areas and office space on the ground floor of each building. The design will re-energise the local area with active ground floor uses and accommodation on the levels above. Cars will be hidden from view within a ground floor car park concealed behind the building with the access off Lower Church Path being maintained for vehicles.

National Regional Property Group has grown throughout 2018, with several appointments and promotions.

In July, Filipe Martins was promoted from Development Manager to Head of Development. Filipe, who is a graduate of University of Portsmouth and a Chartered Surveyor, joined the company in 2016 and supported the final negotiations of the Bow Square project and is the Project Manager for the Fraser Range development. Filipe is responsible for the management of the Development Team providing support and direction on all projects.

In addition to his role at National Regional Property Group, Filipe is a lecturer at the University of Portsmouth on the Property Development Degree Course.

Commenting on Filipe’s promotion, CEO, Shaun Adams said “Filipe brought vast experience and industry knowledge to the business and in recognition of the significant contribution he has made and to release both the time of myself and the MD’s to focus on developing the business and identifying new projects, I promoted him to Head of Development where he shares his expertise and leads the team on all our current and future projects.”

In June, Billy Alsop received a First Class Honours degree in Property Development and in recognition of this and his contribution to the business since joining in 2016, was promoted to Development Manager after completing his degree.

In July, Rebecca Newman joined the business as Development Manager. Her new role has seen her building on previous experience, providing value-driven advice on construction costs to ensure the successful delivery of development projects and has taken on responsibility for the Slindon Street project under the direction of Filipe as Head of Development.

In September, National Regional Property Group appointed a new Degree Apprentice. Jonsun Smart joined the business as Development Apprentice. He is studying for a Property Development degree which will see him also achieve Chartered Surveyor status while working as part of the Development team reporting to Filipe. He is benefitting from academic learning at University of Portsmouth, as well as the mentoring and hands-on experience from Filipe and the team.

MD, Allan Gordon, has dedicated much of his time to supporting both the Bow Square and East Street projects in Southampton, bringing his wealth of industry experience to ensure the successful completion and signing respectively. Allan is a Board Member for Go! Southampton which was set up with the aim of delivering projects and improvements enabling the city of Southampton to reach its full potential ensuring that businesses continue to thrive, and that they are able to capitalise on the many new opportunities arising in the city.

In the office, Kim Wright, the Accounts Assistant, has played a significant role in the support of all the projects within the business bringing her wealth of experience supporting the team, MD and CEO. Projects are often complex and the knowledge and support that Kim provides ensures the continuing success in this key area for the business.

2018 has been a year of giving back to the community and local economy. Over the last 12 months National Regional Property Group has been involved in a range of initiatives.

The company attended EBP South’s Big Bang @ Solent event in April to showcase the wide variety of roles there are in the developer and construction industries, encouraging young people to explore career options and understand the importance of STEM (Science, Technology, Engineering and Mathematics) subjects in the industry.

Business Manager, Jo Burfitt, remains heavily involved with Miltoncross Academy in Portsmouth as a school governor and mentoring a Year 10 pupil. Commenting on the company’s various community initiatives, she said: “As a company that’s all about creating new communities we believe it’s important to give back in the areas we operate.”

In May the company handed over use of its Fraser Range site for emergency services to put its disaster response skills to the test. The area was transformed into a disaster zone for the exercise, which proved vital in helping the likes of Hampshire Fire and Rescue and British Red Cross train its teams.

The company continues its associate membership of Shaping Portsmouth, which is a community interest company that delivers both a strategic and operational partnership between Portsmouth City Council, Portsmouth businesses, and educational institutions at all levels in the City. Our aim is to run valuable and relevant programmes that support the needs of the City, and the objectives of our partners. The team at National Regional Property Group have volunteered in various ways to support Shaping Portsmouth.

At Baffins Milton Rovers FC, based in Portsmouth, the company proudly displays its plaque confirming its sponsorship of the clubhouse at the football ground.

The company has also focused on sharing its knowledge and best practice this year. Managing director Allan Gordon has spoken at several industry events and chief executive Shaun Adams was featured heavily in Decision Magazine earlier in the year talking about “The DNA of Success” providing an insight into how he has grown the business since its inception in 2012.

Shaun Adams, chief executive of National Regional Property Group, said: “2018 has, without a doubt, been one of the most exciting years in our history. We’ve celebrated the completion of our biggest Build to Rent project and the first in the Solent region, along with the commencement of an exciting new project in Southampton.

“Looking ahead we’re very excited about what 2019 has to bring. We’ve had extremely positive feedback on our plans for new developments and we look forward to progressing those in the coming months.

“We see the Build to Rent market as incredibly buoyant and 2019 is certainly set to be a big year.” 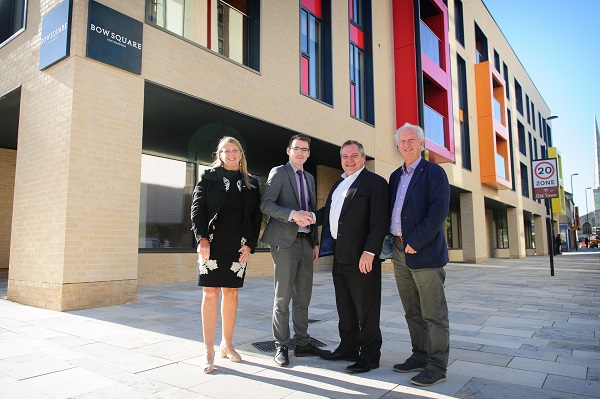 Image: The completion of Bow Square was one of National Regional Property Group’s highlights of 2018