Shaun Adams speaks to Decision Magazine about what makes success

In the article, Shaun talks about how he came to set up National Regional Property Group, regenerating the south coast and how his background in the Royal Navy taught him about teamwork.

Read the full article below courtesy of Decision Magazine.

THE DNA OF SUCCESS

Working in a corporate environment provided just the right amount of frustration to convince Shaun Adams that he needed to set up his own business.

“When I was working as a developer in a construction company I often put forward ideas that were rejected by the board. We didn’t speak the same language. I had known for some time that investment in the build to rent sector in the UK was growing and there were big opportunities to draw institutional investment into the market. I put a proposal to the board about how we could take advantage of what I saw as an emerging market. I’m so grateful now that they didn’t listen to me. I have since done exactly what I wanted to do at the time.”

Adams progressed into property after leaving the Royal Navy in the 1980s wondering what to do next. He went into estate agency and then worked for a house builder and a housing association where he gained an understanding of property development finance.

He set up his own business, now called National Regional Property Group, in 2012, to specialise in sustainable regeneration and development projects. The firm concentrates on sustainable medium to large-scale mixed use and residential developments in town and city centres.

Adams aims to have 1000 units under construction at any one time, focusing on institutionally backed, quality build to rent accommodation with coffee shops, gyms, and break-out areas; the type of scheme not normally seen outside London. Ideal locations are city centres near stations in areas of growing population with a large under thirty- five years old demographic, with high employment.

But aren’t there already too many flats? “There are quite a lot” he cedes, “but the quality is very mixed. Professional tenants coming out of quality student accommodation expect more, and so they should. What we do is driven by their expectations: for example, two-bed apartments also have two bathrooms and are often equipped with smart technology. It’s all influenced by the standard of the accommodation built originally for the Olympic village in London.”

“Transparency is important. I’m not scared to talk about my margins.”

“I’m not only building a business, I’m building a brand,” explains Adams. “It’s important to look not just at profit but also at the future prospect for the brand and our reputation. The more value there is in the brand, the better prospects for me and my family. So transparency is important. I don’t want landowners to feel they have sold too cheaply. I’m not scared to talk about my margins. It’s important for your reputation to do right by one’s partners. A lot of developers think entirely about themselves. It’s just as important that you create a win- win for your partners. Everyone should walk away from a deal feeling they have achieved what they wanted to achieve.

“It’s absolutely crucial that you play a straight bat. We work on large complex projects with stakeholders where engagement is crucial. I believe for example, that ecology is actually very important. You can’t be a philistine and drive forward regardless. Everyone has to feel happy at the end of working with me, and when I talk about stakeholders, they could be landowners, contractors, consultants, agents or neighbours.”

Adams explains that he likes to maximise energy efficiency from a management as well as a tenant’s perspective, citing photovoltaic roofs as an example. “House builders look at what they can sell it for but we look at the long-term return for investors. By putting in sustainability measures we can provide that.”

LEPs bringing the public and private sector together

One major project for National Regional Property Group is working with a local authority to re-develop former fruit and vegetable market warehouses, a complex project involving the relocation of eleven leasehold properties and the construction of 280 apartments and commercial units. The firm worked with institutional investors and an asset management company to bring the £65million scheme to fruition, with completion expected in the summer of 2018.

Adams pays tribute to the contribution of local enterprise partnerships, saying: “They have an important job of bringing the public and private sector together. It’s great for regeneration when you have a number local authorities and business leaders working together on a scheme, regardless of their political persuasion.”

He’d like to replicate that model in other areas, working with local authorities to help realise the vision of their local plans. One of the company’s skills is identifying areas that could have regeneration schemes but where the complexities would be too much for local authorities to manage. In fact, Adams’ ambition is for it to have its own regulated funds. The company could also get involved in management of the properties they’re involved in.

What is success to Shaun?

So what is success? “Numbers are absolutely crucial,” he replies. “The first thing people look at are your accounts and the bottom line. But it goes much deeper than that; it is also to do with your prospects and people and vision. If I’m pitching to investors they want to see the numbers, but then they want to see who I am and how I do things.

“There was a time, not so many years ago, when I had to decide whether to pay the mortgage or the school fees. Thanks to what I have achieved here I don’t have those concerns any more but it’s difficult to change that mindset, particularly when you’ve come from nothing. I have done well, but I’m not where I want to be, so I’m not ready to celebrate just yet. We are on a journey and there’s a long way to go.”

Adams questions whether success is about just having enough money for the luxuries of life. “It’s nice to have a bit more money, I can’t deny that, but people will conclude you’re successful because of the car you drive and the house you live in. But those are products of the work you do. I really don’t know yet what success looks like. I don’t think I’ve defined it yet. The social and economic benefits of what I am doing are becoming increasingly important to me. Our activities over the past three or four years have created up to 300 jobs and brought significant regeneration and training opportunities, including the creation of twelve apprenticeships.”

He makes the point that he had to create his own opportunities. “I come from a working-class family and went to a comprehensive state school where I didn’t do well,” he recalls. “I was a kid in the eighties when training and prospects were very poor; I don’t have a degree and I came out of the navy only as an able seaman. We need a skilled workforce so I feel it’s my duty to use the opportunities I created for myself to encourage and help others, albeit indirectly. I have a wider vision of what I can do for other people in the long term.”

One of the things he would like to do is encourage young people to think successfully, a trait many lack. “A lot of people don’t believe in their own abilities, but when you think you can achieve something, that’s very powerful mindset and it changes lives.”

Adams qualifies this by adding: “I’m not talking about telling everyone they can be millionaires or the prime minister, but they can create opportunities, be focused and believe in what they’re doing. Opportunities don’t just come good; you have to work on them. Then the world is your oyster. My friends would tell you I bore them to death with this: I go to bed every night thinking about what I’m going to do in the morning and how I’m going to do it.”

Building the right team around you

Interestingly, the MD of National Regional Property Group used to be his boss at a previous company. “You know you’re doing something right when your previous boss wants to come and work for you,” says Adams.

“He’s a steady pair of hands and keeps me on track; he reminds me of my good, and not so good, qualities at pertinent times. One of the things I’ve learnt is that you can’t be chief executive and chief bottle washer. You’re only as good as the people around you. So a company can’t just employ people; it has to invest in them. You have to empower those around you to learn and take responsibility at the earliest opportunity so they can do the job you need them to do without your direct involvement.”

His experience in the Royal Navy provided him with a useful mindset in this regard. “I learnt to work as a team, that your job has an influence on others; everyone is an important component. You rely on others as others have to rely on you.” 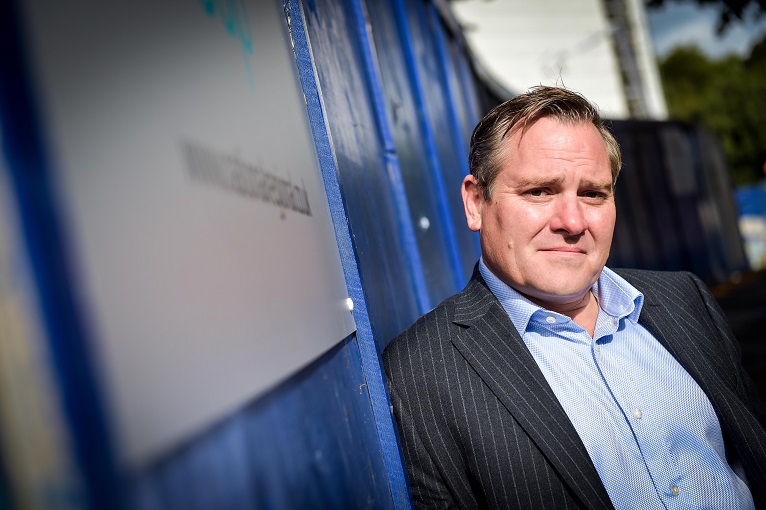 Pictured: Shaun Adams, who has been talking to Decision Magazine about his career and how he sees success